An Israeli startup that created a “smart panic button” for crisis management during violent incidents such as school shootings and terrorist attacks has seen demand for its advanced security software rise dramatically in recent years among private sector companies and organizations.

Yoni Sherizen, the co-founder of Gabriel Network (formerly Blue Systems), told The Times of Israel on Tuesday that the company’s security and safety system, Gabriel, has already been deployed in double-digit numbers of Jewish institutions in the United States. such as synagogues and community centers over the past three years, and that the business has expanded to “Christian communities and [other] non-Jewish communities” as well as business and industry in North America.

“Our product is now being adopted by the banking and financial services industry and we have pilot projects with some of the biggest tech companies, the Big 5,” Sherizen said, referring to the five biggest tech companies: Google, Amazon, Meta (Facebook), Apple and Microsoft. “So we’re looking at data centers, corporate offices or campuses, manufacturing facilities for pharmaceuticals and other critical assets… [we’re] protecting a variety of different types of spaces.

Sherizen, a US-born former rabbi who immigrated to Israel from the UK over a decade ago, founded Gabriel Network with fellow Israeli Asaf Adler and together they created Gabriel, inspired by the biblical guardian angel of the same name. It is a panic button system equipped with sensors, camera and microphone that can be installed in buildings and structures to monitor potential incidents, alert first responders in case of emergency at a specific location, open a communication channel with responders and other security teams who may be on the scene and give all parties “eyes and ears” to follow the unfolding of events, according to the company .

Following the attack earlier this month at a synagogue in Colleyville, Texas, where a gunman held a rabbi and three worshipers hostage for 11 hours before they managed to escape unharmed , a Jewish philanthropist has pledged to fund $1 million in installation, training, and one year of service with the Gabriel System for each Jewish institution that wishes.

The sum should cover paid starter kits for the system for around 500 sites, according to the company’s estimates. The unnamed philanthropist has pledged to recruit friends to make similar donations with the goal of covering every synagogue, school and campus community in the United States, Sherizen said.

Gabriel Network’s technology is based on a security software platform that includes a smart sensor, control dashboard and mobile app to provide integrated video and audio for emergency response, according to the company.

The system includes gunshot detection, weapon detection, video and audio analysis, noise detection, hot spot mapping, geofencing and other features that give emergency responders “eyes , ears and voice on the spot” so that they can avoid “blind entry”. in a situation.

“Technology is about identifying threats or dangers, alerting [emergency response providers] faster and responding both faster and smarter. We developed a unique sensor which was our end point. Now we have gone beyond that; we connect to existing systems that are already in the building, whether sensors or cameras, and overlay our software on top of them. We’re even taking legacy systems and working to make them smarter to identify problems earlier,” Sherizen said.

Gabriel comes with two apps: one for those on the spot – alerting them to what’s happening and where, mapping danger zones and enabling communication with others on the scene to share information and video footage; and a second app, the Emergency Response app, which creates a virtual command and control room for teams approaching the area. 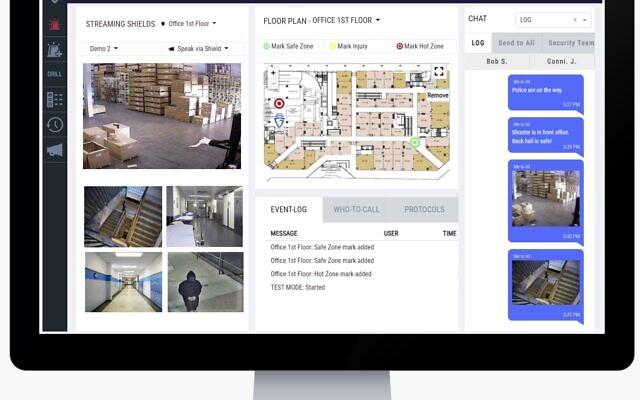 The price of a basic Gabriel kit varies, with starting costs around $90 per month if there are already existing cameras in a given building. The costs for a complete kit, which includes additional features, are higher.

Sherizen and Adler developed the idea behind the Gabriel System following a 2016 terrorist attack in Tel Aviv’s popular Sarona Market that killed four people, and a mass shooting the same year at a nightclub. night in Florida where 49 people were murdered.

“These kinds of incidents create chaos, and the key to saving lives is how people on the ground react in the first seconds of events, before the police even arrive,” he previously told the Times of Israel. 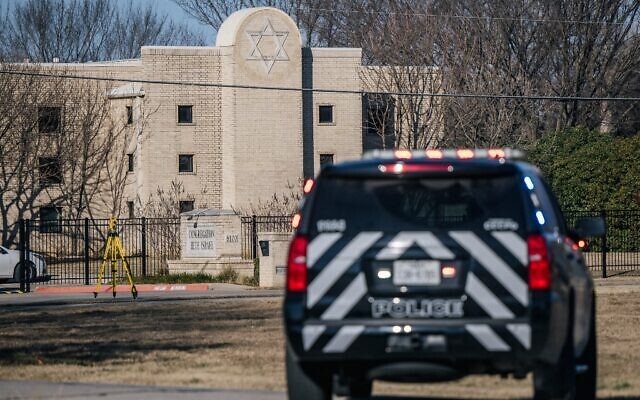 A law enforcement vehicle is seen near the Congregation Beth Israel Synagogue on January 16, 2022 in Colleyville, Texas. (Brandon Bell/Getty Images/AFP)

In Tuesday’s announcement, Sherizen, a former Oxford University campus rabbi who later volunteered with a number of Jewish community organizations in the United States, Europe and Israel, said that the company “saw the ability to democratize technology that was previously only available to special units and put these vital tools into the hands of the people who need them most. Improving preparedness and providing a safer, more smarter and faster.

During the phone interview, he said that “probably we’ve seen the greatest improvement in our technology when we provide that live video and connectivity to law enforcement and anyone who needs to respond, so that we can actually provide a response from a distance, get people to help before someone else gets there.And that’s especially great for places like banks or sensitive places where it’s happening things that can endanger not only property, but also people and…responders,” Sherizen said. 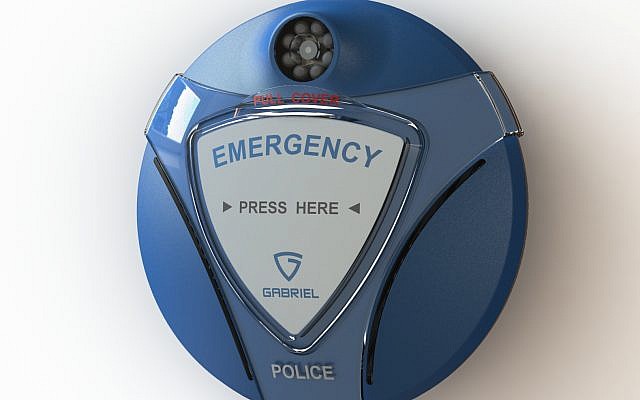 The Gabriel Smart Panic Button, created by Gabriel Network (formerly Blue Systems Ltd.), is equipped with sensors, a camera and a microphone that can be installed in the rooms of a facility, giving first responders eyes and ears to unfolding events (Courtesy)

The Gabriel system is particularly useful in more complex incidents, Sherizen proposed. “If an incident is prolonged, if it becomes more complicated or if there is a hostage situation, the risk, the cost, the damage and the danger increase. And what we are able to do is prevent… chaos from taking over a situation. By being able to intervene remotely and more quickly, you can end these situations much faster, and even spot them before they become really significant,” he said.

An emergency alert at one location can also trigger alerts at related locations.

“We take advantage of a network effect, so if something happens in one place, we alert other places nearby, either geographically or if there is a relationship. So, for example, if we look at what happened in Pittsburgh [when a terrorist killed 11 people at the Tree of Life synagogue in November 2018], that day, the attacker was actually planning to hit multiple locations but was injured by the SWAT team at the synagogue. He actually planned to hurt other people, and we’ve seen that in other situations. So we’re sending a notification to everyone on the platform, either because they’re nearby or because there’s a relationship… so there might be copycat attacks in other cities, and Jewish communities would need to know,” he said. 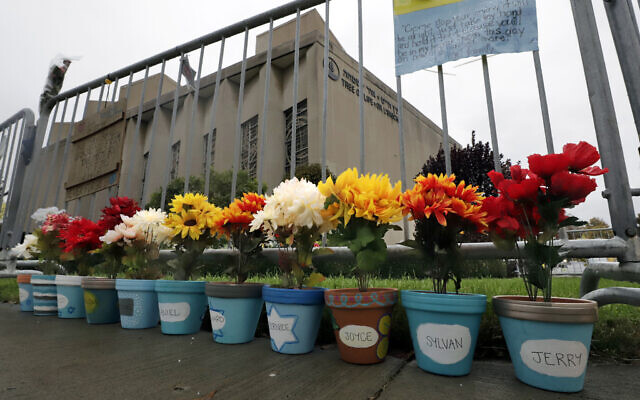 Flower pots, each bearing the name of one of the 11 worshipers killed on October 27, 2018, when a gunman opened fire as worship services began at the Tree of Life Synagogue, line the fence surrounding the synagogue on Oct. 26, 2019, in the Squirrel Hill neighborhood of Pittsburgh. (AP Photo/Gene J. Puskar)

In Colleyville, “this time, thank God, everyone came out unscathed, physically. Unfortunately, that’s not always the case, and we want to act before the next one,” Sherizen said.

In the wake of the attack, Jewish communities have sought ways to bolster security, with 1,500 concerned Jewish leaders joining a Zoom meeting last week to ask US Attorney General Merrick Garland and the Secretary of Homeland Security Alejandro Mayorkas what steps the government was taking to provide protection.

Synagogues and Jewish institutions in the United States have sought to tighten their security in recent years as concerns about anti-Semitism grow.

According to an annual report released Monday by the World Zionist Organization and the Jewish Agency, anti-Semitism is on the rise around the world. 2021 has been recorded as “the most anti-Semitic year in the last decade” with more than 10 incidents per day.

The incidents mainly included vandalism and destruction of property, graffiti and the desecration of monuments. Physical and verbal violence accounted for less than a third of all antisemitic incidents.

On another note, Sherizen said the Gabriel system is also very useful in identifying false alarms or situations that seem alarming at first but ultimately do not require emergency response.

“Our system’s ability to stop false alarms and prevent huge distraction, panic and waste of public resources has saved lives. The cost of false alarms, in dollars and cents, but also disruption, is a big deal and I’m very proud of it.

Gabriel Network employs seven people and is backed by private investors, Sherizen said. Its R&D operations are in Israel, where the “local tech brain is phenomenal”, with sales, marketing and commercialization activities in the United States.

Shoshanna Solomon contributed to this report