MANCHESTER, NH – “Finding Sandler” is an independent film that will have its New England premiere on August 13 at the city’s first International Film Festival at the Rex Theater. The film, from New York filmmaker David Seth Cohen, took years to prepare and is based on a simple premise everyone can relate to: regret.

Turns out, finding Adam Sandler may have been the original goal of the fun and, at times, thoughtful journey, but in the end, this movie is all about chasing dreams, taking leaps of faith, and finding courage. to see something through.

Cohen has spent the better part of 15 years trying to recapture a moment that slipped through his fingers in 1998 while working as a production assistant on the set of “Big Daddy.” He was tasked with delivering clothes to Sandler in his hotel room in time for the premiere of “The Waterboy.” Instead of handing the clothes over to the doorman, as he expected, Cohen was told to take them to Sandler himself.

To his surprise, Sandler opened the door and invited Cohen in for a drink.

Golden opportunity for a budding 22-year-old filmmaker, isn’t it?

But Cohen refused. Not because he didn’t want to hang out with Sandler, one of his personal heroes at the time.

Cohen was double-parked in New York, there was a co-worker waiting in the company car his boss asked him to drive home, and above all, he didn’t want to get fired from his job for s shied away from his responsibilities by yielding to Sandler’s enticing offer.

In the aftermath, this decision haunted Cohen long enough that he decided to make it his mission to make things right.

And as set up in the film’s prelude, the haunting takes shape in 2006, shortly after a real dream in which Cohen connected with Sandler and had his moment. He woke up determined to make his dream come true.

At the time, he had just turned 30 and was living in his grandmother’s basement, still waiting for his filmmaking aspirations to materialize.

The documentary-style film tells the story from Cohen’s point of view. Along the way, he assembles a cast of supporting characters – mostly friends and family – who help him go the distance and includes plenty of footage from a road trip to Manchester where he connected with the Sandler’s former Central High School gym teacher, Don Tibbetts, who helped get him into Sandler’s alma mater. Comments from former teachers on the young Sandler are sure to delight audiences in his hometown.

It also includes cameos from Billy Joel, Dee Snider and Emeril Lagasse, all of whom helped fuel Cohen’s dream. Each encounter gave him the impetus to continue, even as funding and time were running out.

Producing the film, after it lay dormant in a box called disillusionment for several years, is the big win here for Cohen.

After watching the film, I can tell you that “Finding Sandler” is a long and enjoyable journey through the filmmaker’s lens in which Cohen’s tenacity is clearly his forte.

For some local Sandler fans, going to so much trouble just to have a moment with him might seem obsessive. He’s not hard to meet if you live here long enough, as he still has deep family ties to Manchester. For example, my son was able to hit Sandler with a high-five when he graduated from high school in 2010 after Sandler showed up at the ceremony. Sandler’s niece was a classmate of my son.

As for Sandler’s rise to prominence since graduating from Central in 1984, there are those who didn’t see it coming. But after getting her first big break as a cast member on “Saturday Night Live,” Sandler made all the right choices on her own path to success.

He found his bliss in producing a series of light comedies, which became his stepping stone to commercial success as a multi-millionaire movie star whose film collection grossed an estimated $4 billion worldwide.

In recent years, Sandler’s work has revealed another side of the comedian, beyond characteristic teenage humor – his most recent film, ‘Hustle’, has won critical acclaim, including the moving portrayal from Sandler of an NBA scout who puts his career on the line. to prove himself.

And it was Sandler’s current status as a Hollywood superstar that likely kept Cohen from sitting down with him for that drink.

Cohen says he feels this is a deliberate snub — not necessarily from Sandler, but from his handlers.

“It’s weird, the whole thing,” Cohen says of his numerous attempts to get a copy of the film from Sandler, whose executive team at one point told Cohen to halt production.

“It was 13 years of hard work, and looking back to the first time we spoke, I was a brash young man — which I admit,” Cohen says. “I have matured and learned a lot. I have a lot of gratitude for the mistakes I made because I learned so much.

“Finding Sandler” is fun to watch, with cleverly woven animation that provides flashback scenes and even pays homage to some of Sandler’s many hit films.

But in the end, this movie isn’t really about hero worship or the rewind button to find a lost moment. Cohen emerges as an everyday hero in a film about self-discovery – much like the plot of most Adam Sandler films.

Since the end of the project, Cohen has been living a different, but equally sought-after dream. He married a wonderful woman during the pandemic and they are expecting their first child anytime now.

“I thought I needed a drink with my hero, but from Adam I got the inspiration to make a movie and realized there’s a hero in all of us – including family and friends who are there for us when we need them,” Cohen says. “In my quest to find Sandler, I found myself.” 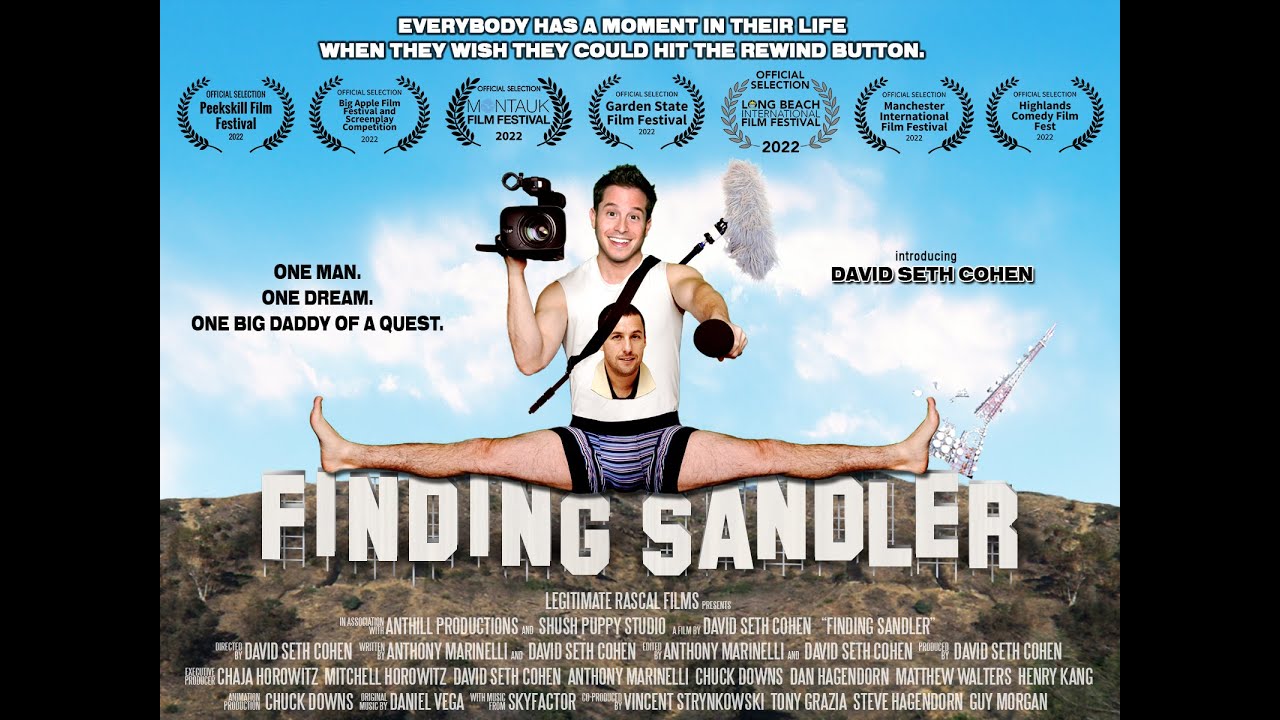 See “Finding Sandler” on August 13 at the Rex

*Best Deal: Buy a ticket to see An Evening with John Lithgow on August 13 at 7:30pm at the Palace Theater and you get free entry to the entire 3-day film festival. Ticket prices range from $50 to $100 and can be purchased here.

Saturday pass: $20 for adults/$10 for students – Admission includes the full day schedule at the Rex Theater:

Click here for more information and tickets for the whole weekend, included when you buy a Friday night ticket to see An Evening with John Lithgow.

Watch the official trailer below