On June 25, HarperCollins released the new 25th anniversary edition of Complete Mission Praise. In its 25 years of existence, Mission Praise has become a cornerstone book by blending the glory of old hymns with the immediacy and relevance of new songs of praise and in so doing has found its way into thousands. churches of all faiths in the UK. and worldwide with more than 2.5 million copies sold. The new edition contains 106 new anthems and songs to bring the total of old and new favorites to 1,250. Mission Praise is compiled by Peter Horrobin and Greg Leavers. Peter Horrobin is, of course, a renowned figure in ministry and publishing circles. This extraordinary man of many talents was the pioneer of Ellel Ministries, which today has a full-time team of over 300 people who run an ongoing series of healing retreats, training courses and schools in around 20 different centers around the world. He is the author of several books on healing and deliverance; he is the chairman of the well-established Christian publishing house Sovereign World Ltd; and he is the author of the Complete Catalog of British Cars, the standard reference book on the history and technical specifications of every model of every make of British car made between 1895 and 1975. Yet this extraordinary man has found the time to get involved in compiling the most successful postwar Christian hymn / songbook.

Peter told Christian Marketplace how this particular work, then called Mission England Praise, got started. “I was the chairman of the local Mission England work area in North Lancashire and the Lake District. The vision for Mission England Praise originated in 1982 from the first night of praise and prayer for Billy Graham’s visit to the UK in 1984. The Baptist Hymnal in the church we were using seemed so limited, compared to the many other hymns and songs available at that time. The many new songs coming out. I realized that Mission England in 1984 would offer the perfect opportunity to bring unity across these divisions by compiling a new missionary hymn and songbook that for the first time would result in traditional hymns and modern songs carry equal weight bringing them together by alphabetical order I tested the vision with Gavin Reid, the national director this weekend – he totally agreed and the rest is history.

“I enlisted the help of two friends, Greg Leavers (a local cult leader playing guitar and piano tuner!) And Roland Fudge (a professional violinist and cult leader at a local church) to share with me the charge of preparing the book and we completed the work in just 12 weeks from start to finish. The resulting book, Mission England Praise, was an outstanding success that fulfilled the vision of the book, bringing together the best of the old and the best of the new in a format that was universally accepted and adopted as the genre of the time. For some time after Mission England, I continued to collect items for the ‘best of old and the best of the new ”and Greg and I worked with the editors to produce continuing volumes from which we removed the word England from the title, leaving Mission Praise as the name that has become so well known over the past 25 years. years. Greg e I have always worked together as a team to make the selection – but it’s Greg who provides the solid musical input. My role was much more to do with organizing the whole project. ”

Peter suggested that there are four reasons Mission Praise has been such a successful publishing success over the years. He detailed them as:

1. It got off to a huge start with a national mission behind the original volume. The songbook kicked off with a pre-Mission England nationwide tour with Cliff Barrows.
2. The phrase – “the best of the old and the best of the new” – was exactly what people wanted. They loved the new songs but didn’t want to say goodbye to the hymns they loved and enjoyed. Mission Praise gave them the vehicle to have both.
3. Musically, where possible, we have tried to use relatively simple arrangements so that the music can be played by most organists / pianists / guitarists who lead worship from top to bottom in all kinds of environments. different.
4. We have continued to update the book so that it always contains modern songs that have found their way into everyday use. With each update we have also delved into the past and found some wonderful old hymns that deserved the resurrection! ” 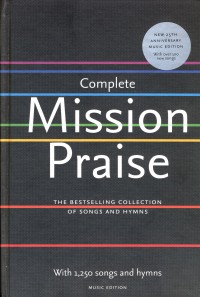 Christian Marketplace asked how difficult it is to select the new praise songs for the anniversary edition from the tens of thousands of new songs released over the past few years. He replied, “Greg and I travel a lot and minister in many different environments, so we tend to be familiar with these songs which are actually sung regularly in a variety of places. We always keep our ears open for. the ones that might fit in the next edition. Right now I have a wonderful old Salvation Army hymn that I expect to include in the next edition! Yes, we had to reject a lot of songs, no because they were bad songs, but there is a limit to what can be included. Ultimately you have to follow your spiritual instinct to determine which ones are suitable for the Mission Praise market. I don’t think we have made too many mistakes over the years. ”

In the past, worship songbook compilers have complained that certain songs they wanted to put in their editions were not available to them, such is the competitive nature of worship song editing today. ‘hui. Did Mission Praise have any problems in this regard? Peter replied: “This is rarely a problem, but there are so many other good songs that can be inserted that it is not a problem.”

Peter said that he and Greg Leavers have been working on the anniversary edition of Mission Praise for about six months in total – but then added, “You actually just never stop working on it. Like I said. , I’m already collecting items for the next edition! “

We ended our interview by asking Peter if he thought Mission Praise will still be used in churches in 25 years? He replied, “If we can continue to recognize those hymns and songs that have the touch of the anointing of God for the season we are in, then I have no doubt that Mission Praise will be here for a long time – yes, even 25 and over. ”

Tony cummings is the music publisher of the Cross Rhythms website and attends Grace Church in Stoke-on-Trent.